Those of you who have followed my blog will know of my long running analogy, comparing our situation with the game, Slender. I do honestly believe that this is quite a fair comparison. For those of you unfamiliar with the game, please at least, check it out. A first person, free, and scary, download, Slender involves a quest for clues, when at the same time, being chased through dark woods by a disturbing, lanky, pale and disturbing figure. Just when you think it is safe, the screen clouds and The Slenderman stands before you. That is our, my family's, situation.

I have been slavishly toiling, as a bitch for Arqiva, for a month now and, to be quite honest, I am struggling to maintain my sanity. I suspect that Chris is in the same boat, but needs must! I did, however, expect to begin to claw my way, week by week, to a state that can be considered by some to reflect financial stability. Fat chance. Idiots and buffoons have ensured that the coffers remain dry, or at least partially. In Slenderman terms, I am standing at the tree-line with The Slenderman directly behind me, arse!

Quick wins for Cerberus have queued up and so we have to prioritise, I just hope we choose wisely.

I've stayed in some shitholes in my time, but...

High Wycombe, that's where I start. The travelling to the job mooching about in the Chalfonts takes its toll, especially after a busy weekend in Amsterdam at IBC. An important demo tomorrow drove me to make a very bad decision, to stay overnight nearby, somewhere I could get to work without a two hour drive. Last week it was at a rather peculiar, but clean, comfortable and classy establishment where I was well looked after by an eccentric lady in Amersham. I walked into town and had a great curry before grabbing a great nights sleep.

This week I opted to look for a cheaper establishment in High Wycombe. As it transpired the price turned out to be the same, but the place...

After driving along the A40 on the way out of town I began to despair at the decrepit, drooping and dreary facades of the roadside houses. It seemed the further I travelled towards my destination the worse the frontage became. Eventually I gave up and pulled over; I had obviously overshot the mark. A quick google check on the phone gave me an address, excellent, two minutes later I pulled into the car park at a shiny hotel. I checked in and was told that my room was in the annexe. The annexe turned out to be a manky semi half a mile down the road.

From here on I swear never to stay in a 'hotel' without tarmac on the drive nor one where the 'car-park' is piled high with empty bottle of white lightning. Still I have been wrong before so I entered the building.

Nope, I was right. My room was at the top of the house. A small room with a cupboard for a bathroom and the same price as the palatial triple room in Amersham, arse.

Right, I thought, man up Gledson and get your arse down to the pub. Cash first. Thankfully, the bright lights of a BP garage guided me towards an ATM. As I withdrew cash from an account I could hardly afford to attack I saw a handwritten sign stuck to the Budgens shop window which bore the legend, 'We serve alcohol till 1AM', badly spelt and written but setting the scene.

I took the cash, which contained five pound notes, never a good sign, and marched off to the nearest pub. The White Horse boasted, Sky Sports, free food and exotic dancing; I kept walking.

The next pub, The Bird in Hand, seemed a little better so I took the plunge. I ordered a pint of Strongbow as I perused the menu; beef madras and chips, fried chicken burger etc etc. I found a table in a corner and sat down. Within seconds a scrawny scouser with yellow and brown nicotine stained teeth asked me if he could join me beneath the large TV. 'Shit', I thought, 'fooking football.' I feigned interest in my phone, sunk my pint and left.

With little option left to me I returned to the bright lights of Budgens and the BP garage. It was still a long way off 1AM, barely 7PM, but I was after a menu of kings. As I approached the checkout an old man in his pyjamas with his left leg in a plaster cast hobbled behind me and nodded a greeting. He held a single can of lager and a packet of Haribo. Normally I would have sneered openly but with my basket of onion rings (a tasty corn snack) a bottle of wine and a star bar, I felt I could not judge.

Thankfully I had my primula and ham sandwiches left from lunch. So, I returned to the room opened the wine and resolved to write emails, eat my meal and fall asleep to the sound of sirens. 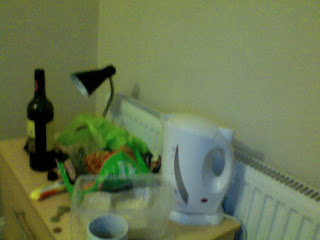