At last I have completed the first draft for the Serbian chapter of the sausage trail. I love going back through photos and notes as I write it generates some new thoughts and resurrects memories. I loved Serbia and if I have anything to say about it will be returning as soon as I can. Completing this chapter means that I can, at last, move on to the section regarding the Currywurst and the time I spent with me old mate Matt in Hamburg. Looking at the notes I took and the scribbles I made I realised that I may have stumbled into a method of writing that works for me, indeed if I manage to generate a vaguely representative few thousand words on my time in the Northern German city then I may actually be onto something. I'll know in the next few days, wish me luck.

On an almost identical note, I have been, once more, been reviewing the plans for the remainder of the sausage trail and, predictably come up with a few alternatives to those I have mentioned recently.

There is a US based sausage website that I am sure I have visited in the past but has either been inactive or very short of content. This seems to hold a great deal of expertise on the sausage role in America (see what I did there?) I am hoping that Kent, the editor, will get back to me with some ideas and suggestions soon. I have also committed to the Italy trip; a visit to the birthplace of the modern sausage, Lucanian. I will be taking my favourite travel companion, well one of them anyway, to Pompeii and Hurculaneum to explore the Roman origins of fast food in general and the sausage in particular.

The future's bright, the future's a 'kin sausage.
Posted by Johngledson at 22:58 No comments:

I was going to call the post, 'A change of calendar', but it was boring and made me sound like a complete dickhead so I changed it. I always planned to give myself some time to catch up with my writing after the Hamburg trip. I had a wonderful in Germany but, at this point, I have not finished the Serbian chapter and as such not even started the 'search for currywurst' section. I am a kick in the arse off finishing the afore-mentioned chapter but have been forced to rethink the future 'sausage trail' events. May and June have the 'pig in a day' course and the 'sausage competition' at Windsor racecourse respectively but the months after that are a bit confused.

July is free now as the Metros to Murmansk rally is not happening due to the commitment to the French project but I should be able to fit in a sausage trail event. August is the potentially weird 'La Pourcailhade' pig competition in Trie-sur-Baise in South-West but September is a bit light. October is going to be very busy as the Bekescsaba festival in Hungary, towards the end of the month, is very quickly followed by my new focus of attention, the 'World Food Championships' in Las Vegas. At this point the jury is still out as to whether or not I am going to commit to this as I am not sure whether or not the US have the same level of commitment to sausages as the rest of the civilised world. I have emailed the organisers but don't hold out much hope for a reply. It would be a great final chapter for the book and climax to the journey and a great conclusion.

If anyone does actually read this please forward any suggestions for a July and September sausage based activity to me.
Posted by Johngledson at 20:57 No comments:

A wet weekend in the Correze

At last I'm back to a more civilised locale, one with warmth and internet and food and proper tea. Don't get me wrong I love the old place in France, there isn't a more idyllic, tranquil place I would rather be but the weather conspired to remove any feeling of tranquility that may have been possible this weekend past.

It's been seven months since dad closed up the gites and house at La Croisille and returned to the UK for an extended tour and although we expected a few hiccups what actually transpired was a tad demoralising. The flight and car hire things went without hitch (no amazingly extortionate deposit taken by Europcar for example) and we arrived at the house mid-afternoon after a brief stop at Intermarche for essentials, bread, wine and cheese. It took us the rest of the day to get the utilities to the house working, well those that we essentially needed, water and electricity. The boiler proved to be a bit of a problem so we gave up on heating and hot water, the phone-line was dead and as such left me annoyed having to carry on without internet. We all had a few drinks before retiring, I wish I'd had a few more as the night was 'kin freezing and carried on for far too long, even fully dressed under a duvet and sleeping bag I was cold. At one point I was awoken by someone opening the bedroom door, Tony was already awake and apparently saw the handle turn and the door open. I honestly believe that there is indeed a rational explanation for any such events but it was unnerving never the less.

The following day saw Tony and I tired and pissed off, the constant rain didn't help. We had planned to have a barbecue but called this off deciding instead to cook up a big pot of chicken stuff. We had visited friends, Dawn and Jason, and Jason had lodged the phone-line fault with France telecom, unfortunately they would not be able to address the issue until Monday, which was absolutely no use to us whatsoever but Jason volunteered to take charge of the situation and ensure he was present when the engineer turned up. The aim of the day was to get the clean up operation on the pool started and to switch on the utilities to the gite, not too taxing on the face of it but nothing ever runs smoothly. The pool was no problem, I spent an hour or so dredging leaves from the floor of the pool, largely to no effect but at least it was a start. It was when we turned our attention to the gite. The electricity had been on since Friday and the gite had been fine but the water was still off and had, in the past proved to be a problem. The water was switched on and it was immediately evident that there was a problem. I don't whether it was the fact that there was no water from the taps of that there was a massive pool forming in the dining room but some second sense told me that things were not as they should be. Tony, in his unique fashion, opted to rip the walls out to check for damage and to find the source of the leak. It was a good job he did.

The plaster-board cam away easily to reveal, what? A large pile of a soft dark matter coated in water and smelling a dank musty smell. I ignored this and thrust my head into the opening, which I could only just manage, and at the same time attempting to point a torch into the dark opening. There was water everywhere but I couldn't make out where the origin of the excess water, Tony, of course had a solution, rip out more walls. The result: 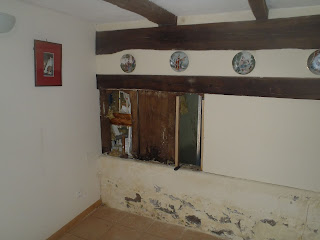 And we had to eventually remove the remaining panel. When the plater board was gone it was obvious what had happened. Something, some animal had been nesting in the walls, probably hibernating through the harsh winter. The plastic cold water inlet to the shower was disconnected and would have been spewing water all over the brown pile, which predictably turned out to be a rather impressive pile of faeces, now all damp and glistening. We put off the job of clearing that out until Sunday, there is a video but I'll not bore anyone with it. Just before we left, I bought a large bag of lime and battered the cavity with it to prevent a recurrence of this travesty, bastard animal. We still have no idea what it may have been but either a Pine Marten or a massive squirrel are favourite as the culprits.

Where did this leave us? We have a better idea of what is required to get the property to a point where we could let punters spend some time in the give, and of course pay for it.

As we sat around the fire we eventually managed to coax into life between the sporadic heavy rain showers, Tony and I discussed the various plans for events this year. The outcome was that we are giving the rally to Murmansk a miss this year in order to focus on the give and house in France. It is also looking more likely that another weekend visit in May will be required as well as an extended visit in June and August. The sausage trail rolls on and another trip to Shetland is on the cards.

Posted by Johngledson at 09:47 No comments: