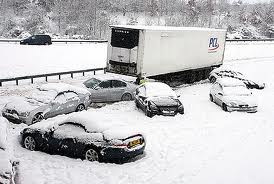 Unbelievable. A couple of hours of snow and subsequent light dusting of Gods dandruff leads our intrepid nation to grind to a halt. Perhaps the mothers with 4 x 4 SUVs, purchased for the short school run, are actually justified in their approach, or perhaps not. Every year, in fact every time the weather yields anything other than perfect blue skies and a temperature of between 15 and 16 degrees Celsius, results in carnage on the road, rails and in the skies. Such as this photo of Asda car park yesterday afternoon.


First a quick note on the whole truck thing for the school run, as it really grips my colonic output. The standard school structure is one of multiple infant/primary/junior schools feeding their annual cohort into a smaller number of senior schools. Looking at the size of the catchment area of the schools for the younger kids shows a radius of a few hundred metres on average, this is obviously more pertinent for areas with more dense residential districts so I will use Gosport as an example. 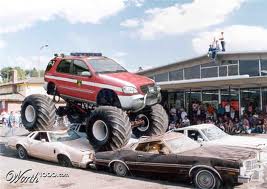 There are at least four infant/primary schools within walking distance of my house, that would be a radius of around half a mile. Yet, every morning the roads choke with parents driving their precious packages to school. There are always exceptions, but most of these lazy idiots can't have more than two or three hundred yards to travel. I constantly argue with Emma on this, this came to point when I downright refused to drive to an assembly at the Junior school for Eddy. My dad relented and drove, I walked, guess who arrived first? I took this picture in the summer of a particularly belligerent mum who was a tad late (I didn't really).

Back to the public transport system. It can hardly be a surprise that at certain times every year the temperature drops and the nature of the precipitation alters into a more solid aspect. We call this Winter and as far as I can tell from my research it has been occurring on a rather regular basis since at lest 1974, it may have happened before this but records are hard to interpret. Most countries with a recurring weather problem tend to plan ahead, so why are we, as a nation fail miserably in this respect. Gritting in advance, around August, would make sense, as would defrosting the railway tracks with some sort of hovering remote controlled laser car, I can't remember if I saw this on telly or dreamt it, it could be both. The moment the Daily Fail reports yet another 'Big Freeze' the public transport, but it's not is it. Perhaps that's the issue, public transport run by private companies, why should they spend any money on upgrading their services for inclement weather conditions? We're used to it. We'll complain but do 'k all about it. Tossers.

Predictably I failed to get much writing done this weekend spending the time instead doing very little and trying to chill out but life conspires against me, forcing the use of cliches and popular soundbites. I shall endeavour to write more next week but another job change looms as does a number of other changes.

On a more positive note, about the only one I have to cling to at the moment, I received a call from Chat magazine for the read back of my article appearing on the 21st February. We took the call in the car, on hands free, so that Emma could listen. On the whole it was well written and sensitively approached, although I doubt that I have ever been bored or indeed watched TV or washed the dishes. Still, it was wonderful to be considered important enough to warrant inclusion in a National magazine.

More tomorrow as this may prove to be a rather busy week.
Posted by Johngledson at 18:38 No comments:

Celebrities doing shit...how far can this format be stretched?

After watching some of the first instalment of the 'Splash' programme I really despaired and any hope that remained for the resurrection of entertainment on terrestrially available channels on my tell-box was finally shattered. I was even more disappointed when Dom Joly, who I have always considered a writer and broadcaster of decent integrity has recently announced that he is to appear on the show, is there no depths that production companies will sink in an attempt to placate the lowest possible denominator? How prophetic that Steve Coogan's alter ego, Alan Partridge, highlights some outlandish formats and ideas as he desperately tries to save his career at the BBC.


It all seemed so comical and outlandish at the time, but now? Monkey tennis? The whole reality TV approach started off as a bit of a novelty but has been stretched to limits almost parodying the original format. Indeed the idea of normal, (well hardly) members of the general public locked up together in differing circumstances is vaguely entertaining, in as much as the Stanford prison experiment was entertaining for those involved. The 'contestants',  for want of a better description, are not in any way representative of genuine society, aspiring as they do to achieve the elusive status of celebrity without actually having any genuine talent. Indeed, this untalented factor is compounded when those 'kin idiots made famous in a reality show, Made in Chelsea, The only way is Essex and of course Big Brother, appear shortly after as a 'celebrity' in 'celebrity' Big Brother, I'm (not really a) celebrity get me out of here and now Splash.

I feel that I must say, that beyond a brief and critical view of these programmes I try my absolute hardest to avoid them, sometimes with little success as the media, both printed and broadcasted become obsessed.

First post of the new year, I still hate the Disney Channel

I logged onto my blog for the first time in a while and was surprised to see that I haven't posted since Christmas Eve. I has started a number of posts in the period between Christmas and New Year but failed to complete any of them, which I just forgot.

So here we are, the first post of 2013. The world did not end, time ticks on and all too quickly life returns to the normal daily routine, or at least as much of a routine that I will allow (I loathe the thought that tomorrow will be the same as today).  My long term contract is quickly drawing to close, I may only have a few weeks left, so I am escalating the exposure of my company at the same time as looking for another contract. I will be starting a professionally based blog very shortly and as such will not bother polluting my Pirate Badgers blog with anything other than personal nonsense.

The year began as the previous one had ended; with me searching for any reason not to write, to excuse my lack of progress with 'The Sausage Trail', which was great for other jobs I had spent months ignoring; I finally collated my 2000AD and Judge Dredd comic collection, rewired the AV kit in the lounge, sorted the hundreds of DVDs and XBOX games that have slowly grown in number over the course of 2012, I even de-fleaed the dog...twice. Then, yesterday, I received an email that summarily gave me a right royal kick up the arse. even now, as I'm blogging about my book, I have my iPad next to me and occasionally break for a quick game of Battle Monkeys (try it, it is amazing). I won! The email was from a literary magazine who are currently organising a German-themed spoken word event called 'Wanderlust' and have asked me to appear as a guest speaker. That combined with the attention from a number of newspapers and magazines has really spurred me on to get the trail rolling once more.

A recurring question that has intrigued me and fuelled my ever active imagination yielding future goals and aspirations has been one concerning a sequel. OK, I haven't even finished the first book yet, but if there is any measure of success from the final product then I hope that there will sufficient interest to justify a sequel. A number of destinations have been suggested, Indonesia, India, China, all over Africa. With the proper time and budget I would love to do these and more.

The sausage trail aside the year has began in a positive and productive manner and one which I feel I must maintain. I have also received an email from The Sausage King, a guy who has a wealth of knowledge on sausages, I have responded and look forward to a potential joint venture.

Thoughts later on the Everest trip and other charity rallys.


Posted by Johngledson at 15:11 No comments: