I received my new passport at the weekend, just in time for the pseudo-family trip to The Shetland Isles. I know that a passport is not necessarily required for an internal trip with our land but for some reason I do feel somewhat naked travelling without one. The memories of the old British passport, all black, official and massive are but a dim and distant memory. It was a godsend to generations of military personnel as it provided not only a means to construct a perimeter but acted as a weapon as well. The real shame is the for the first time in my travelling life I had managed to cultivate and maintain an impressive array of visas and stamps.
My cornet is well oiled and ready to go, in fact the only problem is a slightly dented bell-end, and my cornet is a bit beyond repair too (only joking, it will effect the sound a bit). I am still somewhat nervous about taking part in a marching band again, after twenty years, but I'm sure it will be tremendous fun. The rest of the time spent on the mainland will be taken up with pursuing my Shetland quest for sausages, Barbara (our nominal host), will hopefully have some frozen pork for us to take home and Globe Butchers in Lerwick always have some good stuff. I realise that I will almost never become a shining light in the world of brass but I may sparkle somewhat for a moment in the land of sausage.
Trepidation and nervousness is growing with my fellow travellers, particularly Beth. I have checked the weather forecast, especially the shipping forecast for the next few days. It is peculiar that the general weather forecasters, the Met office I mean, seem confident to spout general theoretic nonsense on the likelihood of conditions for days, in fact weeks ahead. But, and I can start a sentence with a BUT, it seems that whenever a serious situation is concerned i.e. shipping, no serious prediction is made more than 24 hours in advance, worth a thought.
Writing, that's yet another serious consideration, my writing has stalled, again. I know where I need to be with regard to the sausage trail but I am, as usual, somewhat behind with the schedule but only by a few weeks. My novel, on the other hand is months behind.
Well time for bed. I've been told.
Posted by Johngledson at 20:37 No comments:

At one point, a time when I had not really seen or heard of a great deal of American animated comedy, I actually believed that there were some talented, and indeed, funny writers over the other side of the pond. Then I actually took the time to watch some of the programmes and completely changed my view. I realise that there is no accounting for taste but, and it is a big but, without the experience to compare there is no foundation to complain. Nonsense I suppose without specifics, so let me supply them.
A young man, who shall remain nameless, I will for the sake of this account choose the name...Sam. Ok, Sam has advocated the jocularity and comedy genius of 'Family Guy' for quite some time and as such I took him at his word and made the time to watch this popular animated series. Critical? Intolerant? I am certainly both but I must say that I was suckled on programmes such as 'The two Ronnies', 'Porridge' and 'Monty Python'. As I (im)matured I absorbed 'Black-Adder', 'Red Dwarf' and 'Fools and Horses'. There is genuine genius in all of these but, another big 'kin but, my lads have no notion or interest in them. Instead they prefer the inane, formulaic, bullshit of American nonsense. Heigh-Ho, no accounting for taste I suppose, but, I laugh at the size of this one. Without a real ken of what has gone before and shown the rubbish written by the hacks that put together such shows as the animated dross, and others; Friends, Two and a half men etc. etc. then our children are lost. Lost in a wilderness of heavily telegraphed yet pathetic visual gags (Benny Hill was best at this) and obvious reversals I would prefer a televisual time machine to take us back to a time when it was best just to make people laugh and feel better about themselves.
Finally, I must say, at the behest of my conscience, that this is all all opinion and that I am a militant, opinionated, comedy snob. Laughter exists everywhere and we should allow the generation of the humour to arise at every opportunity, but it's my blog!!!
Posted by Johngledson at 19:48 No comments:

I haven't been watching the star-gazing thing on the BBC but my dad has. One point discussed in the programme, as pointed out by dad, was the likelihood of the planet getting hit by a meteor/asteroid. Come on, it's all about calendars. The blinkered human calendar is all we consider, in general. The question actually translates as, 'will the earth be destroyed by a rock from outer-space in my lifetime?' Extremely unlikely is the answer, but if the original question is re-asked, i.e. what is the probability of the Earth being hit by a massive chunk of extra-terrestrial rock? I would say 1:1, it's going to happen!! Likewise; the likelihood that a catastrophic natural disaster is going to devastate the planet and decimate (or worse) the populace is the same, i.e. certain. I realised some time ago that the important factor here is what calendar you are considering, human, geological or astronomical. Simples *eek*
Also, this 2012 Mayan calendar nonsense. Let's face it, a race planning ahead may have lost interest after a date they knew they would probably never see, coupled with this running out of space on a complicated, carved rock calendar means the a replay, with the Mayan Project managers and risk assessors is probably more trouble than it's worth.
The distillation of all of this wisdom is clear; as an individual I have no power over the stars, tsunamis, volcanoes or prophecies so my best bet and only realistic approach is to open another bottle of wine, help as many people as I can and try to be a good person, or similar.
Posted by Johngledson at 19:16 No comments:

I can't believe that it's over half way through January and so much has happened. I thought that after last year things would be a lot quieter in 2012. Wrong; it was Sam's birthday yesterday, had a few drinks and a karaoke, neighbours asked us to keep it down as we were, and we were, being a bit too noisy. I had to face it, quarter to six on a late Sunday afternoon IS rather late so we sit things down. Shame, it was quite a good night, the lads were singing and I wasn't too shit (Charlotte was awesome though, jealous....;-) Other than that, so much more has happened, Pat has died, work is still shit and the arrangements for Shetland have been completed.
The sausage trail is really taking shape, Shetland is going to be great, especially after the new arrangements. I think that my co-travellers; Emma, Will and Beth, are somewhat concerned now that I have booked them onto a freight ship as opposed to the lush passenger ship they were expecting. However, it appears that we are the only passengers on the crossing and will have the lounge and meal all to ourselves, so we will see how different it actually is.
The Serbia trip is also taking shape, the sausage festival in Turija is the biggest in the country and habitually attempt to create the worlds longest sausage, in fact they managed to do this a couple of years ago but the representative from Guinness failed to show so the 2.5 kilometre sausage was merely a tasty treat.
Anyway, I need to get back into the swing of blogging.
Happy New Year all.
Posted by Johngledson at 20:05 No comments:

As we are about to embark on whatever journey 2012 holds for us I had a look at my hastily constructed calendar for sausage related activities and similar and realised how unrealistic it is/was. What was I thinking? The trip to Spain in February has gone, too much in the first few months, and the Murmansk trip cut by a week. It has been updated in the sausage calendar, at the bottom of the page if anyone is interested. Next up is the return to The Shetland Islands, this time I will be accompanied by Emma, Beth and Will, leaving Sam and Ed with Dad holding the fort back in Gosport.

I am really looking forward to my second trip to the most northern land mass in the British Isles, the weather will almost certainly be a lot worse than when last visited in November, in fact the ferry crossing may be a bit lumpy. We'll be staying here, at Bressay lighthouse: 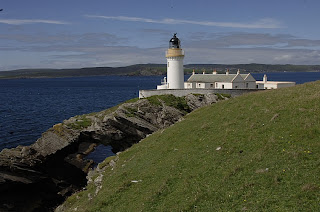 As usual, when the idea is first floated to any of the kids for us to stay any way our of the ordinary they protested in the extreme with the standard, 'It's haunted.' This time, however, as Ed is not with us, both Emma and I have stopped talking about it in the hope that Will and Beth will forget about the accommodation until we arrive. It does help that the journey is more complicated than normal, a case of cars, planes and ferries. Beth in particular is concerned about the ferry crossing from Aberdeen to Lerwick, an overnight sea journey at a time of year when the North Sea makes even the most seasoned oilman shudder. Looking at the bookings as I write, it seems that all appropriate crossings are overnight and probably prone to a more choppy trip, sorry guys. There are a mere twenty five days until we leave and I have to step up my cornet practice so that I don't embarrass myself when I join a marching band that have years of experience at the Up Helly Aa Viking Festival.

Shetland aside, there a couple of trips I need to schedule. One at least is essential, it's more of a sensible change than anything. A friend of mine, cheers Matt, has brought to my attention a German phenomena which may or may not have been influenced by the occupation of British forces in and around Hamburg following the end of the second world war. I won't elaborate as it has the hallmarks of being a bit of a scoop if I follow it through properly. This means my trip to a general German sausage festival has morphed into a visit to a specific one, or at least for specific purpose. The second trip can wait until the second book but intrigues me more than any other. The Lucianian sausage was developed near Naples at the height of the Roman Empire, this was one of the first definitively defined recipes and standardised sausages on record.

The rest of the year is slowly taking shape, and will, no doubt  change as time progresses. Watch this space.
Posted by Johngledson at 18:28 No comments: