Change, change, it's time for another change

It has been a while since I blogged with most of recent time spent in working with a new set of monkeys (well the management at least) and slowly becoming more and more disillusioned with the broadcast behemoth that is Arqiva. In fact the disillusionment has slowly led to increasing depression as the travel and fruitlessness of effort has frustrated and infuriated me to extreme measures.

That aside, we have a new family member. Fiona Dawn Wilkinson joined us on Wednesday 13th November. She is an absolute delight and as miniature Daschunds go she is agile, quick witted and has fitted in very well. 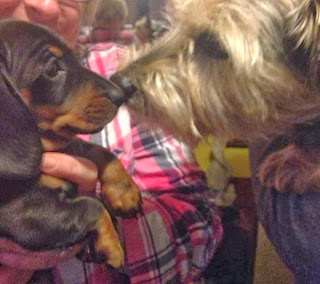 Last week Chris and I exhibited at BVE (British Video Exhibition)  North at the Manchester Central exhibition centre with Garland Partners which was a slow and dull show but did show that we are really onto something and need to find a way to dedicate more time to progress.

Which leads me to an explanation of the blog title. It wasn't too long ago that we, in the Gledson household, were pooling coins to buy food, and I would have taken any job going, which I 'kin well did. Maintaining momentum with Cerberus had been difficult to say the least, but with a great deal of support from our partners and suppliers we are now in a position to move on to the next stage. Unfortunately this will entail someone taking on a full time mantle to take the helm to move this puppy forward. To this end I will turn in my notice this week, not as bad as it sounds as I aim to see the year out in the current contract and have alternative means of income filtering in slowly.